Scalable and maintainable CSS with ITCSS

There are UI and UX enthusiasts who honor the power of it to paint the web while there are developers who take a huge sigh when new changes to the existing codebase have to be introduced. I am talking about CSS and it’s controversial perspectives among developers. However, no matter how your attitude towards CSS is, as a fronted web dev it’s a major part of your work to provide an appealing UI to your customers. As a result it’s nearly inevitable to skip touching CSS code. I can imagine a few readers at this point shaking their heads and thinking things like “Why does he write a blog post about CSS. It’s just a few selectors with style properties. What should be complex here?”. When I did my first steps in web development and especially in CSS I thought quite the same until I had to deal with my first larger CSS codebase along with the fact of working on it in a team. This experience opened my eyes and made me thinking of whether there are better ways to handle and scale CSS. Luckily I found a promising answer to my question which I want to discuss in this blog post.

What are the main problems?

Before outlining potential solutions it has to made clear what the actual problems with CSS are. From my experience and learnings about this topic so far, I would say that despite it’s apparent simplicity CSS is hard to get right. What I got out of this in the last days and weeks is that both CSS as language and the developers do certain things wrong. It is definitely true that stuff like the dependence on order of source code, the cascading nature or the specificity concept of CSS make maintaining and working with it harder. However, from my point of view the things developers do wrong are more important since I think there have to be ways to deal with these peculiarities of the language. Therefore, following list should outline the issues CSS projects usually cause.

The idea of ITCSS

I hope you agree with me that these problems give some reason to be tackled and it’s time to write better CSS code. I used an open space conference in October in Linz to discuss how other people deal with these problems and tried to find ways to improve CSS development. I was introduced ITCSS (Inverted Triangle CSS) and immediately liked this idea of organizing CSS. ITCSS is not a library or framework you can apply but rather a mindset of how to structure CSS. It’s a layered architecture providing a guideline on how your CSS should be structured. The following figure illustrates the architecture of ITCSS. 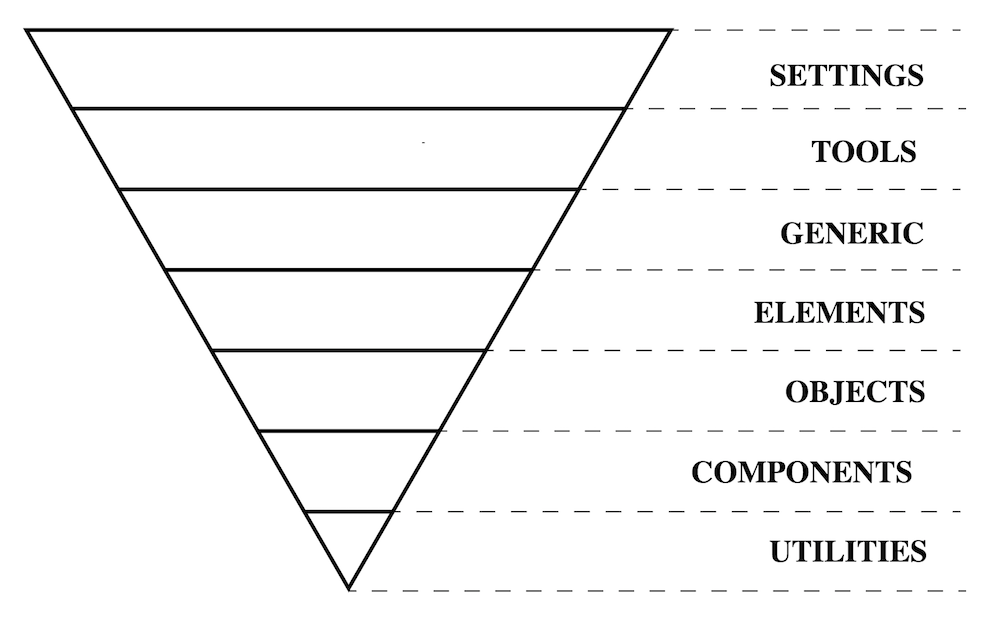 As shown in the figure, ITCSS proposes seven different layers ordered in an inverted triangle. The idea is to start with the most generic styles in the top layers and get more specific in each layer moving downwards. Using this approach turns out to be very powerful with CSS due to the two main properties cascading and specificity. ITCSS helps to overcome the problem that the browser has to jump forwards- and backwards in an CSS file to apply styles on the one hand and the issues of adding extra selectors or !important just to make things more specific and overwrite other styles on the other hand. Following list shortly introduces each of the proposed layers along with an example.

It is important to mention that the first two layers are only relevant in case you use preprocessors like SASS or LESS. They should not contain any plain CSS code.

The cool thing is that ITCSS is flexible and extensible. If you do not use SASS or LESS and stick to plain CSS just skip the first two layers. If you do not need resets, skip the generics layer. In bigger projects it sometimes even makes sense to introduce an additional layer. This can all be done with ITCSS as long as you ensure the inverted triangle to be fulfilled.

No matter whether you start working on a small website or a huge web application, ITCSS promises to introduce tidiness into the jungle of CSS code. Although I have not yet applied ITCSS successfully to different projects, I finally discovered a neat process to manage and scale CSS. A good perspective in my opinion is that you can encourage your co-workers and team members to keep this triangle always in their mind when touching a CSS file. As a result the structural CSS problems should be diminished when using ITCSS consistently throughout a project. I hope I could show you something new with ITCSS and you consider using it when working with CSS next time. If you like to dig deeper into the topic I can recommend the stuff from CSS guru Harry Roberts.