Let’s kick-off my dev blogging year by looking back onto the exciting three days I had last week in Amsterdam. I had the opportunity to attend the frontenddeveloperlove and vuejs.amsterdam conferences.

With this blog post I want to broadly capture my conference experience, learnings and latest trends in the JavaScript and especially VueJs ecosystem. I hope you are as excited as I am ;)

I don’t want to bash any of the previous conferences I was, but my experiences in the last years at bigger confs regarding organisation and care for attendees were quite mixed and not always that positive. For the frontenddeveloperlove and vuejs.amsterdam I can sum up the attendee experience as predominantly positive. Firstly, the Theater Amsterdam as venue was amazing. I have not yet seen such a huge screen for the presentations. 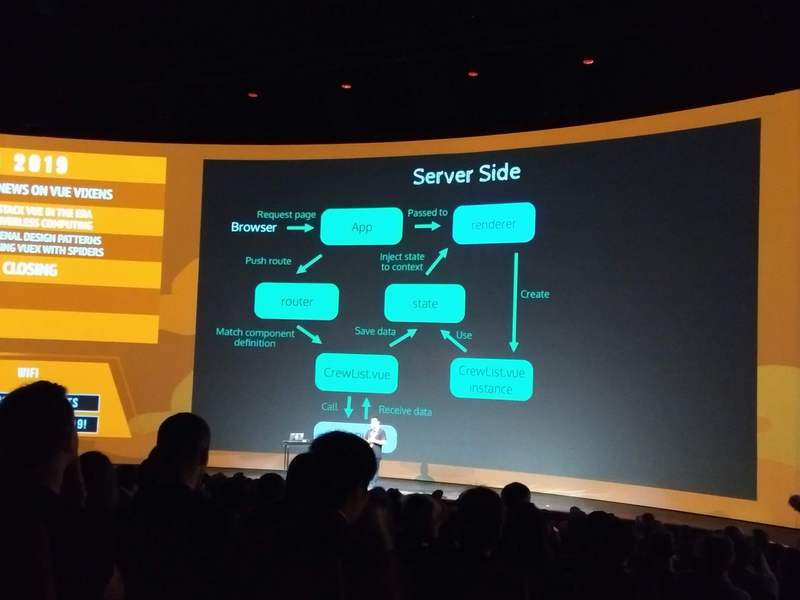 The time schedule pretty much held throughout the three days except the small changes due to the reason that two of the speakers were ill and could not make it to the conference. Besides the technical part, organisation of food and drinks for the attendees was also quite well. Different food corners, coffee drinks and other goodies did not let you back hungry or thirsty and formed an enjoyable conference day. Only the classic Wifi issue, I basically had on any tech conference, was the same here.

It was only last year when I first got in touch with the Vue.js framework. However, I really liked it from the beginning for its simplicity and flat learning curve. Luckily, I could learn quite a lot about it in the first few months and even use it on a green field project at my workplace. Thus, I was really looking forward to enhance my skills in Vue at this dedicated conference. As desired, I did not get disappointed in any way. Many of the talks were really great and eye-opening for my upcoming frontend work. What was really astonishing to me is firstly the flexibility and size the Vue.js ecosystem has built up over the last years and secondly the active and amazing community gathering this open source project. Listening to many of the core team members, whereby some of them are even working full-time on Vue.js, brought me some really new insights. Next to the Vue specific talks the first conference day tackled a wide palette of web coding parts like Bundlers, Babel, JavaScript Testing, Accessibility, or Animations. In the upcoming few paragraphs, I want to shortly walk through my personal highlights from the conference. Some of them I definitely have to look more deeply into in the next few weeks and months.

Obviously there is a lot of information I got out of those three days packed with talks. Personally I think there were a lot of useful things I want to leverage and try out in projects I am working on. Since I don’t want to make this an extraordinary long list, I picked my definite highlights.

The face behind webpack and core maintainer Sean Larkin held two talks which definitely stood out. Firstly, he knows how to present rather complex stuff and secondly, he manages extremely well to make listening to him pleasing. In his first talk at the frontenddeveloperlove he shared insights into the upcoming Webpack 5 version and promised important performance improvements due to things like “Persistent Caching”. You could really feel his passion about Webpack when he talked about the hard facts of understanding Webpack from the inside out. Although it does not matter that much to frontend devs how webpack is bundling their things as long as they get an optimized bundle with their app at the end of the chain, it grabbed my attention when he visually explained the inner workings of Webpack from compilation to parsing and resolving. All in all the talks were definitely one of the best these days.

Performance optimizations and PWA in Vue.js

Although I have been using Vue.js for some time now, tight project schedules have not yet given that much time to dive deeper into performance optimization of Vue apps. So, I really liked the concise tips and tricks from Filip Rakowski and Eduardo San Martin Morote to make Vue apps lighter and faster. Topics like lazy loading routes and components, which are shown conditionally, code splitting or webpacks magic preload and prefetch comments showed me that it’s not that complicated to optimize for performance. There are even some low hanging fruits which can be implemented without hassle. Moreover, they also introduced some great tools to monitor and analyze bundles I did not know before.

This is one of the completely new technologies I learned about at the vuejs.amsterdam. Before arriving at the Theater Amsterdam I only have heard of this framework called Nuxt.js in relation with news on Vue.js but had no idea what it actually is and what it can be used for. Gregg Pollack gave a very handy and practical introduction and showed on stage how to scaffold and build a simple Nuxt.js app. It builds on top of Vue.js and what really inspired me is its power to create universal apps, which combine server-side rendering and SPA features, for an optimal user experience as well as SEO friendliness. Sebastien Chopin (co-creator) of Nuxt.js subsequently talked about some advanced stuff and gave insights into the team, organization and next steps for Nuxt.js. A third Nuxt related talk rounded up by showing that Nuxt.js can also serve very well as static site generator which solidifies the flexibility of the framework.

The fourth highlight for me which I want to name is GraphQL as it was not only mentioned once these days. Although the APIs I am usually working on are solid with good old REST, some of the presented GraphQL features showed that it’s worth to try it out. Especially the explicitness of GraphQL when it comes to retrieving the desired data properties from an API seems superior in contrast to traditional REST. Although some of these concepts where maybe a bit overwhelming initially, GraphQL implementations as Apollo and the vue plugin vue-apollo were presented well so I could get an impression what can be done with it.

To wrap things up, Amsterdam was worth the journey :) The conferences were well organized and there did not occur annoying situations I have already experienced at other conferences. I noted down a lot of useful things among those three days and could learn from the leading experts in the JavaScript and especially Vue.js community. Besides, mentioned highlights it was also inspiring to listen to those full-time open source maintainers and their hard work they do for the JS community like Evan You, the creator of Vue.js, who even had a dedicated talk regarding this topic. It’s nice to hear that the Vue.js ecosystem continues to grow and 2019 is going to be exciting as well.